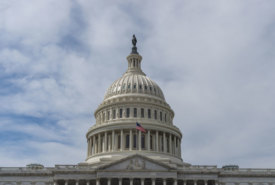 Lawmakers Expect Infrastructure Guidelines After State of the Union

The Trump Administration is expected to delay its timetable for unveiling infrastructure guidelines until after the State of the Union, lawmakers said Jan. 11. More

Less than one week after Donald Trump was elected the 45th President of the United States, it is clear that the President-elect places a high priority on infrastructure spending. "We are going to . . . rebuild our highways, bridges, tunnels, airports, schools, hospitals. We're going to rebuild our infrastructure, which will become, by the way, second to none. And we will put millions of our people back to work as we rebuild it," Trump said in his victory speech. More

Congress is expected to vote this week on a stopgap appropriations measure known as a "continuing resolution" (or "CR") to keep the government funded through mid-December. Although this will avoid a government shutdown, it will effectively freeze state and local transportation authorities' funding levels, denying them -- until at least December -- increases they had been anticipating. More

The House of Representatives on Oct. 16 unveiled a six-year, $325 billion highway bill with just two weeks remaining until the current extension to highway funding law is set to expire. It is a companion bill to the Senate's Drive Act passed in July. It is unlikely that both chambers will be able to iron out differences between the two bills before current highway legislation expires at the end of October. As a result, although the House legislation is a crucial step in the process, NATSO expects at least one more temporary highway bill to be enacted before Congress is able to pass long-term legislation. More