The House Transportation and Infrastructure Committee advanced its five-year, $547 billion INVEST in America Act (H.R. 3684) early this morning after 19 hours of debate. The measure passed despite opposition from Republicans who objected to Green New Deal Initiatives and a lack of bipartisan input. The committee voted 38 to 26 to advance H.R. 3684 after considering nearly 200 amendments and adopting a Manager’s packet of amendments. More 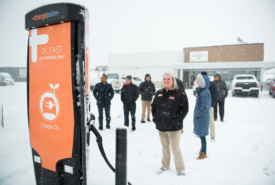 NATSO, representing the nation’s truckstops and travel plazas, the National Association of Convenience Stores and the Society of Independent Gasoline Marketers of America, today encouraged members of the House Transportation and Infrastructure Committee to oppose the INVEST in America Act. More

The House Transportation and Infrastructure Committee is scheduled to take up the nearly $500 billion surface transportation bill known as the INVEST in America Act June 17, with lawmakers expected to offer more than 100 amendments during one of their first virtual mark ups. More