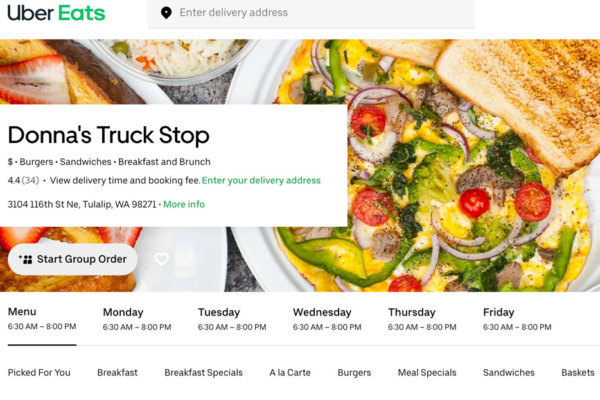 With dine-in options limited due to COVID-19, Donna's Truck Stop in Marysville, Washington, recently partnered with Uber Eats and saw strong results in the first week.

“Our Uber Eats sales equated to 7 percent of our hot food for that week. Our biggest surprise was on Saturday and Sunday, which are usually slow. It impressed me how much we sold off of Uber Eats those two days,” said Brian Couch, owner of Donna’s Truck Stop.

Getting Set Up
Isaiah Britt, merchandising manager for the location, worked with Uber Eats to get the menu loaded. “We sent them a PDF of the menu, they created the items on the account, and then we can go in and edit them,” he said, adding that Uber Eats made a few mistakes on the menu, which he had to go in and fix.

There was a bit of a learning curve, and Britt said the biggest challenge was learning how to organize and see everything. “It took me about an hour or two to familiarize myself with the website and the process, but once I learned that, it really is easy,” he said. “Now it will only take me about two minutes to add something new on.

Selecting the Menu
Donna's uploaded its full menu but left off some of the lower-priced items. "I didn’t want to put a $5 item on the menu," Couch said, adding that the food needs to generate enough revenue to make it worth the fees. "Under the standard contract, they take 30 percent, which I think is pretty common."

Even though the fees are high, those are sales the location wouldn’t have had without the Uber Eats partnership, Couch said. “We hope to capture new customers. By having your name on the Uber website, they see us and know we have food,” he explained.

The best-seller right now is the chicken fried steak that comes with eggs, hash browns, gravy and a side of toast, muffin or biscuit.

Couch said Uber Eats provided a list of tips, and he might work to integrate some, such as family-style meals. “We may do something like that soon, as soon I can figure out what to put in it and how to price it,” he said.

Marketing the New Offering
Donna’s Truck Stop shared the new partnership with Uber Eats on its social media page, and the location shows up when someone opens the Uber Eats app. “There are options you can pay for, but we haven’t opted for those,” he said.

Operational Insight: Pick Up Process, To Go Containers
The location just signed up with Door Dash. Britt said it he answered general questions via Door Dash’s website. “I gave them our menu. They are in the process now of putting it on the website. Once it is up, I can edit it again,” he said.

Both Uber and Door Dash provide tablets that alert Donna’s Truck Stop to orders. Couch said that so far, no one has had a problem receiving an alert from the Uber Eats tablet. “Tt beeps louder than you can believe when you get an order. We did a couple of test orders to train staff, and you could hear it throughout the whole store,” he said.

Couch said the location has had to order a receipt printer that will work with tablets.

The pick-up process has been easy. Uber provides the pick-up person’s license plate number and photo, just like with the Uber ridesharing app. That makes it easy to identify who is picking up an order. “They come in and say, ‘I’m with Uber,’ and you confirm on the tablet which order he is picking up,” Britt said.

Couch said Donna’s secures the bag before it leaves the building. “It makes sure nobody can get inside of the bag and steal a fry. We staple their receipt onto the bag, too. They know we’re taking care of their order,” he said.

Donna’s Truck Stop did purchase different containers for the new wave of to-go orders. “To-go orders in the past have always been paper plates covered in foil. Now we use a Styrofoam container and line it with aluminum foil to help keep food warm,” Couch said.

It works, but one challenge Couch discovered is that some food might stay too warm. “I ordered over-easy eggs on Saturday. By the time they got to my house, they had turned into just under over hard. They were still cooking in the Styrofoam,” he said.

Was the Investment Worth It?
Overall, Couch said he thinks it is essential for truckstop and travel plaza operators to get on board with food delivery services, especially as more and more professional drivers opt to have food delivered to the cab of their truck. "The best way to combat it is to join in and serve the community,” he said.