Robert Bolduc founded the Pride C-store and Truckstop chain in 1972 in Springfield, Mass. He is currently the Advisor. The chain has 32 stores and two truckstops in Mass. and Conn. and is now constructing a third travel center. Bob is an engineering graduate of Notre Dame and has a Master’s degree from Purdue. He served in the US Army in Vietnam. In 2012, Bob, as he likes to be called, was honored as the top entrepreneur in Western Mass. Bob was the first in Western Mass. to add a Dunkin Donuts franchise and, later, a Subway restaurant. Pride was the first in Mass. to sell ethanol based gas and later became the first to sell biodiesel. Pride is now the poster-child for the sale of fresh foods in convenience stores. Pride is proudest of its community support and charitable giving, truly believing in giving back with management time and financially.

MOST RECENT ARTICLES BY Robert 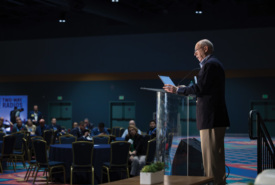 Excited For the Future of Our Travel Center Industry

Many of us were able to meet face-to-face in Florida, and we were all able to learn and build on each other’s ideas while taking away critical information from industry thought leaders and suppliers. More