NATSO's magazine looks at the legacy of Jack Cardwell, truckstop industry pioneer. Cardwell is credited with developing one of the first truckstop chains and establishing the modern-day model for a truckstop.
More 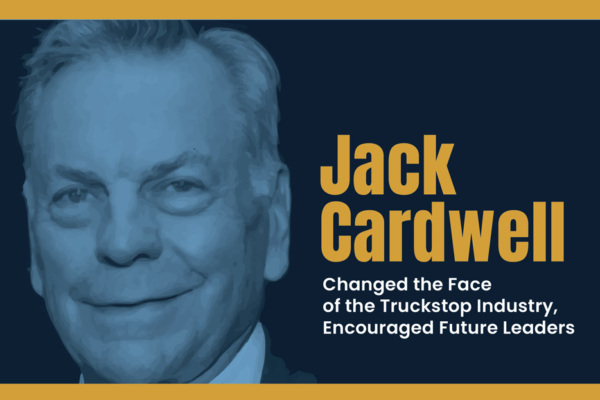 Jack Cardwell, who is known as a legend in the truckstop industry, passed away on January 23 at the age of 89. Cardwell is credited with developing one of the first truckstop chains and establishing the modern-day model for a truckstop.

“Jack Cardwell was a wonderful man that created a truckstop brand that truly cared about professional drivers, the motoring public and the team players that were working there,” said Jim Goetz, Jr., a former Petro franchisee and past NATSO Chairman.

Shaping the Future
Darren Schulte, NATSO’s vice president of membership and a past Petro employee, said Cardwell was the first to innovate truckstops. “He is the father of the modern truckstop as we know it today,” he said. “The industry would have looked a lot different had he not been a part of it.”

Delia Moon Meier, senior vice president of Iowa 80 Group, said Cardwell helped shape the industry's future. “He really did think of the next generation of truckstops,” she said.

Cardwell had a legendary stance, said Dan Alsaker, president of Broadway Truck Stops. “Jack was the quintessential definition of a Texas wildcatter when it came to truckstop innovations. It seemed he invented things that most people in the industry tried to copy.”

Lisa Mullings, CEO of NATSO, said Cardwell was a friend to many in the industry and will be deeply missed. “Jack was an innovative thinker and leader who, in many respects, was ahead of his time in evaluating what customers want and need,” she said.

Building a Brand
Cardwell began his 68-year career as a service station owner with Jack’s Super Service, which led to the Chevron-built El Paso Truck Terminal. In 1975 Cardwell built the Petro truckstop, which was hailed as the first self-service truckstop in the United States, at Horizon Boulevard and Interstate 10 in El Paso.

“Jack transformed a large part of the industry by enhancing and increasing the amenities and standards that the professional driver was accustomed to on the road,” said Roger Cole, former NATSO chairman, a partner in a Petro franchisee and editor of NATSO’s Biz Brief.

Cardwell put customers first. “Jack always questioned everything that was brought forward to him, which was frustrating at first for many of us, but we came to realize that it was inquisitiveness more than anything why he questioned programs, process and procedures,” Schulte said. “It was important for him to understand so he could properly support your strategy or tactics.”

Cardwell developed the best recipes to fill out his well-known menu and buffet line and duplicated the restaurant repeatedly, which was difficult. “It is still difficult, and most people fail,” Meier said.

In public interviews given through-out his life, Cardwell said his innovative idea with Petro was to treat truck drivers with dignity and “build them a place where they feel like they’re appreciated.”

When Cardwell started Petro, there was a quick-service oil change for cars but not Class 8 trucks, and Cardwell introduced the idea, Meier said.

Embracing Franchising
Cardwell was new to franchising, especially within the truckstop industry, and began franchising Petro locations. “He attracted a lot of people into the industry that weren’t in the industry before,” Meier said.

Iowa 80 Group was one of the earliest Petro franchisees, opening the Joplin Petro in 1987. At that time, franchising wasn't like it is today. “If you think about 1987, franchising anything other than McDonald’s wasn't a big thing,” Meier said. “There were chains, but they weren't necessarily franchised.”

Meier said being associated with the Petro brand helped with bank loans. “In the 80s, banking was terrible. You could not get a loan to save your life, so having a franchisor and something the lenders could look at helped us get the loan,” she said.

Providing Industry Insights
Cardwell continued to grow the chain of Petro Stopping Centers and focused on improving the industry as a whole.

Cole first met Cardwell at The NATSO Show in San Antonio in 1975. “Jack had recently opened his first Petro Stopping Center in that city and offered to take a small group of us on a tour of his new facility. That was who Jack was. He shared with his colleagues and competitors in the industry in the hopes that all would benefit,” Cole said.

Alsaker met Cardwell in the mid-‘90s. “For me, he was larger than life when it came to questions about long-haul service and supply changes and government affairs issues that racked our daily operations,” he said.

Developing Leadership
Cardwell was actively involved in NATSO throughout his career, serving as chairman of the board from 1983 to 1984. He received the Hall of Fame Award in 1997. Plus, he helped shape future leaders.

Cole said Cardwell was influential in his decision to act as NATSO’s chairman, which Cole had previously declined. “As president of a franchise operation running four large travel centers, I felt I did not have time to devote to NATSO as well and shared those regrets with NATSO’s CEO,” Cole said, adding that a few weeks later, Cardwell visited with him. "In his kind manner, he explained that just as he had felt the responsibility several years earlier to share his time and talents with his industry as a leader in NATSO, I, too, should feel that same passion for providing what leadership I could to the organization.”

In effect, Cardwell told Cole that the business would be a better entity through its efforts with NATSO because of the value that NATSO brings to our industry. “Jack effectively gave me his approval to share my time with the industry,” Cole said. “He was a great partner, a great mentor and a great friend. I will miss him.”

Alsaker said after his dad passed away, his conversations with Cardwell became more frequent and delved deep into industry status and NATSO’s role in government affairs. “Jack’s encouragement, which he gave me often, was to keep a firm hand on legislation and its effect on our business,” he said.

Cardwell cared about not only the industry but also the people in it. Alsaker said Cardwell encouraged him to routinely monitor his health through good exercise management, frequent physical checkups and follow-ups.

“Little did I realize then the value of his suggestion to visit the Mayo annually for a Stress Executive Physical. I believe that maintenance saved my premature departure from the family business that I inherited. It was Jack Cardwell who saw the light at the end of a very long tunnel,” Alsaker said. “He showed me balance, and he checked on that often with me.”

Moving Forward
When Cardwell sold the chain in 2007, the company consisted of 69 truckstops in more than 30 states. Cardwell owned 44 locations and franchised the others.

Cardwell sold the majority of his company to TravelCenters of America. As part of the transaction, Hospitality Properties Trust, a Massachusetts real estate investment trust, purchased the property of 40 of Petro’s 44 company-owned truckstops for $630 million plus $25 million in closing costs. The transaction involved 1,036 acres of property in 25 states.

TravelCenters of America paid $70 million for the operations at all Petro's company-owned truckstops and the leftover sundry property. Hospitality Properties Trust immediately leased the properties it purchased from Petro properties TA.

Additionally, Cardwell’s C&R Distributing has provided petroleum products to customers in West Texas and Southern New Mexico for 60 years. Cardwell was recently honored in 2021 by Chevron for his 60 years as a Chevron dealer and marketer with C&R Distributing.

Establishing a Legacy
According to those who knew him, Cardwell’s reach will last well into the future. “Jack has touched a lot of lives both in and outside the indus- try. Maybe not everyone agreed with his style and tempo, but for sure we all believed in the man, and that's an epitaph worth repeating,” Alsaker said. “We believe Jack Cardwell had something to offer that would change the way we saw things and the way we would reconstitute attitudes. He has made a difference.”

Schulte said Cardwell left a lasting influence on employees. “Those of us that have had long and successful careers can thank him in some way or another as we have reaped the benefits of innovation,” he said.

Goetz said the next generation has brought new energy and ideas to Cardwell’s leadership. “It was not only Jack but also the Cardwell family that brought the best people together and created the well-known brand we now call Petro Stopping Centers,” he said. “It is one thing to build something. It is another to sustain it, and the next generation was particularly helpful.”