In this video, NATSO's Alternative Fuels Council reviewed the RFS's critical elements with a primary focus on biodiesel.
More 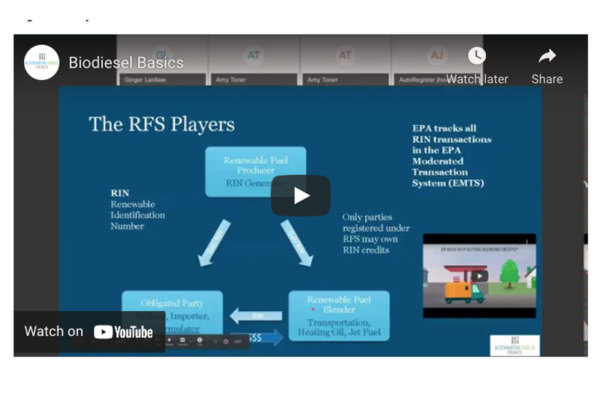 Congress created the Renewable Fuel Standard (RFS) program to reduce greenhouse gas emissions and expand the nation’s renewable fuels sector while reducing reliance on imported oil. As part of the program, EPA sets volume requirements on how much fuel has to be blended into the industry. NATSO's Alternative Fuels Council reviewed the RFS's critical elements during an industry webinar with a primary focus on biodiesel.

There are several players and types of fuel within the RFS standard, said Ginger Laidlaw of the Alternative Fuels Council. The first is the biofuel producer, which is the entity producing the fuel. Producers have to register with the EPA and work with engineers to ensure the biofuel they’re producing meets requirements. The biofuel producer or supplier can  then sell to a biofuel blender. In the case of biodiesel,  the biofuel blender takes the biodiesel (B100 or B99) and blends it with diesel to make B5-B20.

Biodiesel (as well as ethanol, and many others) gallons receive a renewable fuel identification number, also called a RIN. “Every gallon of fuel produced by the biofuel producer has a RIN, however, different biofuels receive different RIN ratios.  For example, when the blender buys biodiesel, they get 1.5 RINs for every gallon of biodiesel, Laidlaw said. “Those RINS are with the wet fuel that you're purchasing. When you blend the biodiesel with diesel, the RINs come off and can be sold to an obligated party,” she explained.

An obligated party is a refiner, importer or reformulator. “EPA has standards on how much fuel has to be blended into the industry. To buy or sell a RIN, you have to be registered with the EPA. This is something the Alternative Fuels Council can do for you," Laidlaw said.

EPA tracks all RIN transactions in the EPA Moderated Transaction Systems (EMTS). Laidlaw explained that part of the process in EMTS is that operators must document when they received the load and the RINs, when they blended/ it and when they separated the RINs. The Alternative Fuels Council RIN Management application is connected via a node to EMTS to provide a cost effective, business friendly way to stay in EPA compliance and maintain a system of record.

When RINSs are first sold with gallons downstream, they are attached or assigned RINs. The producer creates the RIN as fuel is produced or sold downstream. The producer must create a RIN and attach it to wet gallons (K1=Assigned/Attached RINs). “The RIN travels with the wet gallon until it has been blended,” Laidlaw said. “K1 RINs cannot be sold as is.”  Once the biofuel is blended to make transportation fuel, heating oil or jet fuel, the RIN becomes separated (K2=Separated RIN). K2 RINs may be sold.

“RINs are fungible and may not represent the actual gallon you are buying,” Laidlaw said. “It is strongly suggested that you only accept K1 RINs with your gallons and know who produced the RIN being transferred to your company.”

When working with smaller  biodiesel producers, it has become important to have qualified RINs, called Q-RINs. “Some biofuel producers employ third-party engineering firms to qualify their production and RIN generation. A Q-RIN provides assurance that the RIN can be sold to an obligated party and at market value,” Laidlaw said.  EPA’s annual volume obligations determine how much biofuel the obligated parties must produce and/or how many RINs are needed for that compliance year.and thus what drives the RIN market.  EPA normally announces standards by Nov. 30 of the preceding year.

Please contact Ginger Laidlaw with the Alternative Fuels Council for any questions regarding the Renewable Fuel Standard or RIN management at glaidlaw@natsoaltfuels.com or 515-988-1626.