Interstate billboards give you exposure to large numbers of travelers every day and night. I believe that this is one of the most effective forms of advertising.
More 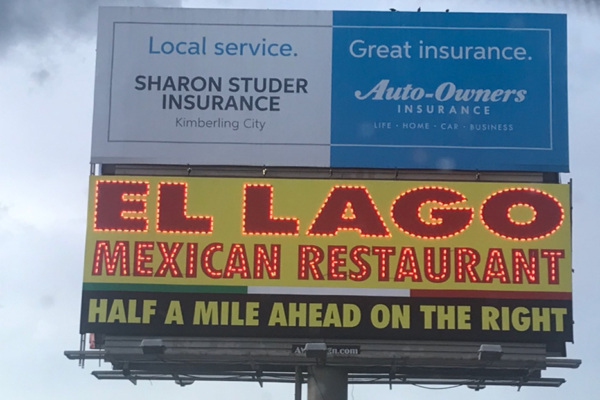 Now more than ever, there is a need to let your customers know you are open.

Interstate billboards give you exposure to large numbers of travelers every day and night. I believe that this is one of the most effective forms of advertising.

Billboard Options to Consider
When we think of billboards, we think of the conventional billboard that has been in use for, well, longer than I can remember, and I’m 62 years old!

You have the conventional billboards alongside the Interstate or highways, with some illuminated and some not. Placement and readability is the key to these.  These types of billboards are incredibly valuable to your business if done right! I will also say that some folks are merely throwing hard-earned money out the window if these are done wrong

Now you are seeing more digital reader boards, which were first used in places like Times Square. You routinely see these in metropolitan areas and tourist areas. There are also smaller versions now used as menu boards, for airport advertising, etc.

The technology associated with some of these is exciting. These options include day-part advertising, such as breakfast in the morning, coffee or hot drinks when it is cold out and, conversely, refreshing drinks when it is hot outside. You could also create targeted ads, such as for allergy medication when the air is full of pollen.

Ideally, I'd like to see billboards within a few miles of your exit. Some marketers prefer to advertise right before a competitor's exit, while some marketers advertise at quite a distance. Usually, you are relegated to choose from the current billboards that are available in your area. If you can’t find your first choice, always keep an eye out for a better location. It is essential to let your billboard representative know that you are interested in a better option should one come available.

Most advertisers calculate the cost of advertising based upon impressions, and billboards give advertisers a lot of bang for their buck. Billboards cost an average of $5.22 for 1,000 impressions, compared to $7.91 on Instagram or $17.67 on TV.

Let’s look at this from another perspective. If a billboard is $3,500 per month, divide that by 30.4 days per month, which means you're paying $115 per day. That $115 divided by a pool margin of, say, 15 cents-per-gallon, which would require you sell an additional 766 gallons of gas and diesel per day to break even. If you take additional profit contribution of say eight cents-per-gallon from the store, food and other sales, your breakeven drops to an extra 500 gallons of gas and diesel per day.

I can share some personal success stories and can also say that one member told me they opened without billboards, and once they got them in place, the difference was immediate and significant. Some locations even use them to announce that they will be opening soon.

Design Best Practices
What makes the best billboard design? Most people put way too much on a billboard. It's a billboard for Pete's sake, not a Readers Digest condensed story, which, admittedly, I like to read!

What you put on your billboard is going to determine if someone will stop or pass right on by.

People driving their vehicles and reading your billboard have a limited time to look, which means you have three to four seconds to get your message across. If there is a passenger, then you might have an additional one to two seconds.

When choosing a design, certain colors are better than others. Typically yellow, light blue and white work well. Darker colors sometimes don’t work well at night unless they are illuminated well.

I believe that you can put two or three messages max, and pictures say it so much better than words! Take a look at these pictures that show great examples of what travel center operators are doing. 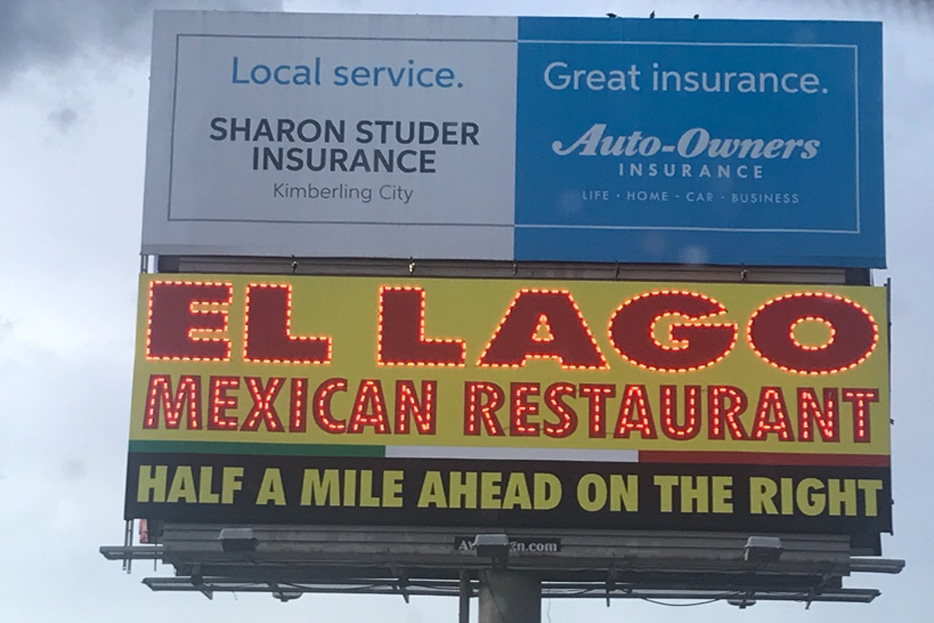 If you look at the picture of the billboard that uses LED lights to highlight the restaurant name, you can see that the other competing billboard above does not begin to catch your eye for the very few seconds you have to read the message while traveling by.

Another consideration to look at would be if you can add gas and or diesel price signs to your billboard. Let’s take a look at some real-life examples to help illustrate my point. 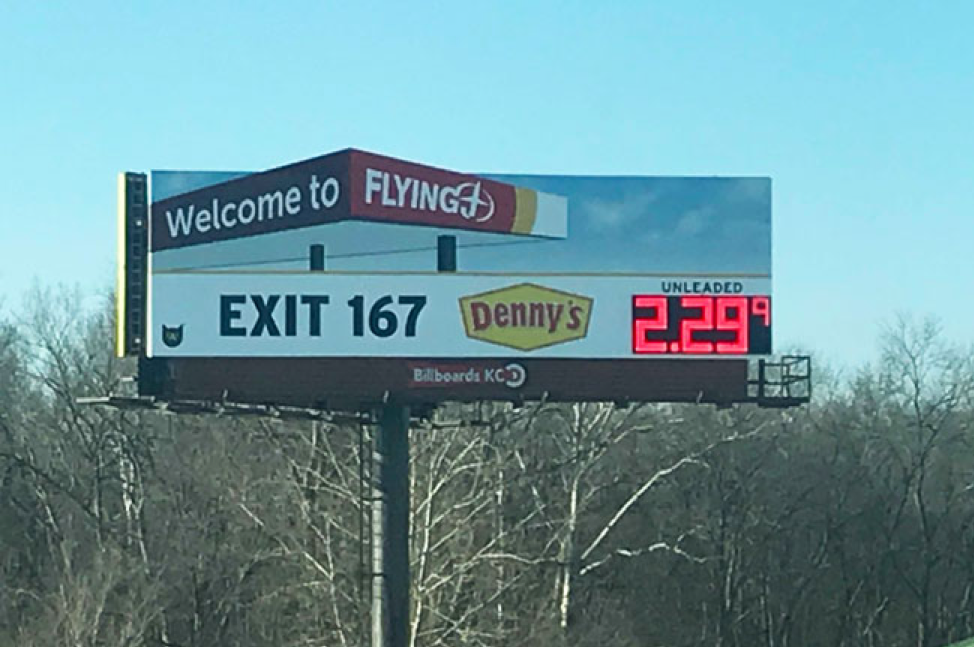 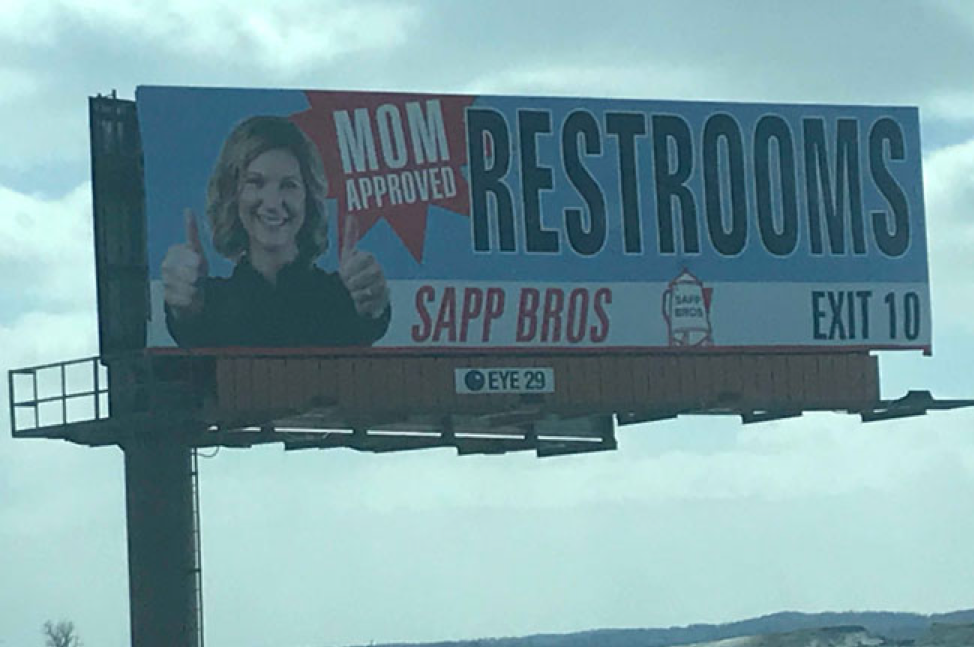 Next time you design your billboard copy, print it off and hold it up at arms’ length for three to four seconds and pull it away. This will better demonstrate the view that customers are going to see. Most people receive their artwork via computer and stare at it intently, but this is not the real-world experience that drivers and passengers will view your advertising. Less is more!

If billboards are illuminated, make sure the hours that the lights are on are spelled out within the contract. You want dusk to dawn unless you are not open 24 hours. Many billboards are poorly illuminated, so do a drive-by at night to see how it looks in the dark. What's more, some colors do not show well at night, so take a good look at your other billboards and see what color combinations work best.

If a strong wind damages your billboard copy, who is going to pay to replace it? Will billing stop until it is replaced? What if your Interstate is closed for an extended period due to flood, bridge collapse or a hurricane? These “Acts of God” do happen, and your agreement should have “Force Majeure” or “Failure to Perform” language included. This is for the benefit of both parties.

Billing is another item to make sure you understand. Some companies like to bill in four-week cycles, which effectively turns your contract into 13 billings per year (52 weeks divided by four-week cycles = 13).

Make sure you read the details of your agreement, and there is no better time to negotiate than when first entering into the contract or upon a renewal term.

Interstate Business Logos
These are the blue signs that feature logos, which are usually separated into the categories of food, fuel, lodging and camping.

These signs deliver your message at the time when drivers are making their decisions, and I believe them to be very cost-effective. Availability varies from state to state, and there are other restrictions as well. Contact your State Department of Roads or do the Google search.