Fleets of the Future will Include Alternative Fuels, Automation

At NATSO Connect 2022, a panel of speakers shared their insights during a “Fleets of the Future” Keynote address.
More 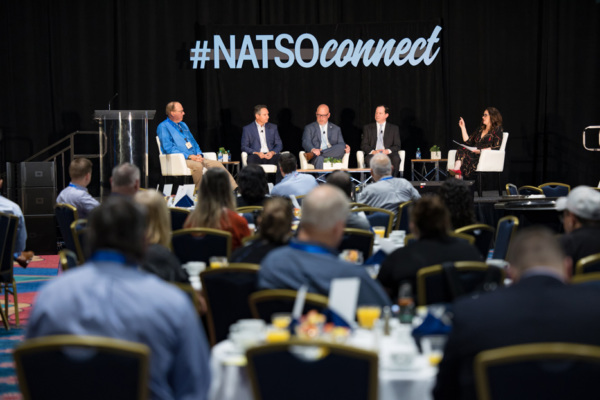 New technologies are bringing change to the trucking industry, and alternative fuels and autonomy will play a critical role in fleets of the future. But challenges remain as the industry transitions to more efficient and technologically advanced vehicles.

On Feb. 8 self-driving truck company Embark handed over a few of its trucks to Knight-Swift in what the companies called the first instance of a carrier owning and operating autonomous trucks as part of its fleet.

Williams said some autonomous providers are very good at technology, but don’t understand trucking and that the Embark collaboration aims to bridge those gaps.

“It is important for us to know what is coming, what it does and doesn’t do and how that affects how we do business,” Williams said.

Plus AI released a Level 2 autonomous vehicle with a driver in the cab with the goal of reaching Level 4, Wiley Deck said. Manufacturers currently can’t release a Level 4 truck, which is fully automated. “We’re installing our Level 4 product as a Level 2 product with Amazon, and we’re working with other fleets as well. It is an evolution, not a revolution,” he said.

TCA’s David Heller said drivers will remain in the cab although autonomous technology is progressing. “Make no mistake, there is still going to be somebody in there in case there is a security or safety action that has to happen,” he said.

Numerous regulatory and logistical challenges have yet to be hammered out, according to Deck. Certain roadside events can occur that you can’t simulate, Deck said. “Who puts out the road flares or the triangles when the truck is disabled on the side of the road? That hasn’t been discussed yet,” Deck said. “Or who fuels the tanks?”

At the same time, a patchwork of state rules and regulations serve as an impediment to the full integration of autonomous vehicles, Deck said.

The industry needs a good transition plan to continue attracting drivers. “The more hype and the more discussion around automated trucks, the more our drivers say, ‘Maybe I need to look elsewhere and that can’t happen,’” Williams said.

Increased Adoption of Hydrogen and Electric
Williams said investors increasingly are interested in the company's environmental, social and governance (ESG) efforts and expect companies to focus on non-financial factors. As a result, Knight-Swift is taking a more formalized approach to its ESG goals.

Williams cited additional challenges with EV heavy-duty vehicles, including less payload, lengthy charging times, and the inability of the trucks to travel as far as a diesel truck before refueling.  “When you talk electric trucks, there are three words you have to understand: weight, range and cost. That sums up everything you want to know about electric trucks. We think the technology has legs. The fact of the matter is, because of cost, is that going to be limited in terms of what we can do?”

Knight-Swift also will be running a hydrogen fuel cell truck later this year in cooperation with Cummins.

Alan Marder with Hyzon Motors said Hyzon is working to bring down the costs for hydrogen technology and the fuel. Hyzon is a global supplier of hydrogen fuel cell-powered heavy vehicles and focuses on helping operators accelerate their transition to cost-effective, zero-emission operations, including access to hydrogen.

Hyzon has several hydrogen-powered commercial trucks on roads across the globe. But unlike other truck manufacturers, Hyzon uses cab and chassis from existing equipment makers instead of building its own.

There is currently a cost differential between hydrogen and diesel, and hydrogen becomes more competitive if diesel reaches $5 a gallon. “If we did it through waste, we could produce that at less than diesel cost, but you have to add delivery and dispensing costs. Right now, the combination of all three makes us more expensive than diesel,” Marder said. “We’re working to keep the price down.”

As adoption of hydrogen fuel cell trucks increase and more hydrogen is produced, the more costs will come down, Marder explained.

Williams said that hydrogen trucks currently are cost prohibitive, and that diesel will remain a critical fuel for the trucking industry even as newer technologies expand and gain scale. “The market tends to run toward efficiency, and diesel fuel today is the most efficient energy source we have for transportation. While electrification will take off and hydrogen will take off, I don’t see diesel going away anytime soon,” Williams said.