The Environmental Protection Agency (EPA) on Dec. 1 issued its proposed renewable volume obligations (RVOs) for 2023, 2024, and 2025 under the Renewable Fuel Standard (RFS). EPA has proposed to require 20.82 billion gallons of renewable fuel in 2023.

Under the RFS, EPA has full statutory authority to determine the annual volume requirements for all years after 2022. EPA has proposed to require 21.87 billion gallons of renewable fuel in 2024, and 22.68 billion gallons in 2025.

EPA was obligated to finalize its RVOs by this week after the U.S. District Court for the District of Columbia approved a consent decree agreement requiring the agency to finalize the volume obligations by no later than November 30.

NATSO continues to digest and analyze this complex and important proposal. At first glance, NATSO is surprised that EPA is not fully taking advantage of this opportunity to send unambiguous signals to the market that investments in lower carbon fuels will be rewarded. The lack of growth in the advanced category is hard to justify given the amount of production capacity we expect will come online in the near-term.

We are similarly surprised by the ambitious growth in the ethanol category in light of that fuel being less environmentally friendly than other, advanced biofuels, as well as ongoing policy uncertainty and infrastructure, supply, and compatibility impediments. Advanced biofuel production will continue to enable the market to satisfy the blending mandates, but it is imperative that EPA ensure going forward that any growth in ethanol demand does not crowd out incentives for more proven, environmentally attractive advanced biofuels.

For 2022, the agency previously set the total volume at 20.87 billion gallons, including 5.63 billion gallons of advanced biofuel, and 2.5 million gallons under the supplemental standard. These numbers reflect actual gallons blended for that year.

EPA has also proposed a framework for how electronic Renewable Identification Numbers (e-RINs), would be permitted under the RFS. The proposal would allow automakers to generate a RIN when electricity is produced from qualifying renewable biomass.

NATSO has long argued against placing the value of e-RINs at other segments of the value chain, such as with automakers. Doing so would not incentivize private investment in charging stations or consumer investment in EVs because the e-RINs’ value would not be shared throughout the value chain. It would simply provide additional incentives to an industry already encouraged to invest in EVs via separate federal policy regimes.

NATSO will provide a more in-depth analysis in the coming days, and will file comments on the proposal ahead of the deadline on February 10, 2023. EPA will also hold a virtual public hearing on January 10, 2023, for the proposed rule. 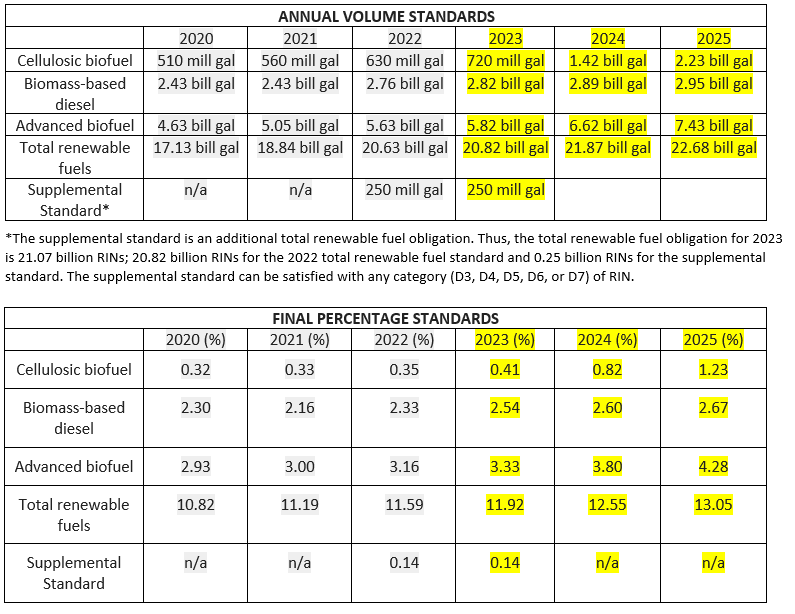