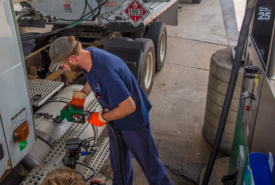 Cut Through the Jargon with this Biodiesel Dictionary

Like any industry, biodiesel has its own lingo that can be confusing to a newcomer. I never want this be a barrier to learning more about how biodiesel could benefit your travel plaza or truck stop operations with its competitive pricing, strong performance and lower emissions. So I’ve provided some definitions of common terms in the biodiesel industry. More

The truckstop and travel plaza industry has changed significantly since our early predecessors opened the first Interstate highway-based fuel stops, and we are in the midst of changes that are going to once again re-shape our industry. More

Risk Management: NATSO Members are Talking. Are You Listening

When I meet with travel plaza owners to discuss the risk management culture at their businesses, I often notice a repeating pattern. They have good intentions of making employee and customer safety a priority, but their good intentions don’t always get acted upon. They cite sticking points such as: I’m too busy. I’m not sure how to do it. We don’t really have any problems. Although these reasons can indeed be legitimate, they are often excuses. And excuses, my father always taught me, are like armpits—everyone has them and they all stink. More

Key leaders in the travel plaza industry and their suppliers came face to face at The NATSO Show 2013 in Savannah, Ga., in February, exchanging ideas and uncovering new solutions to improve their operations and plan for the future. More

The Power of Knowledge

I am a firm believer in the power of knowledge, and I feel we all owe it to ourselves and our businesses to learn something new each day. Gathering information and then sharing it with each other keeps us moving toward a future that is full of promise. As an industry, we can collaborate with each other and share ideas that spur the innovation that will take us into tomorrow. More

DAS has received the 2012 Design of the Times Platinum Best of Category Award in the convenience retail category from the Path to Purchase Institute for its EEC (Electronic Engagement Center) Endcap Display. More