Pat’s Travel Center in La Porte, Texas, got its start in 1980, and has been expanding and changing ever since.
More 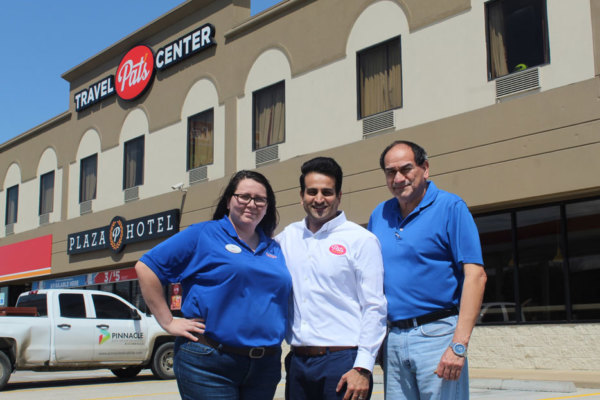 Pat’s Travel Center in La Porte, Texas, got its start in 1980, and has been expanding and changing ever since. “I don’t think we’ll ever stop remodeling,” said Sean Momin, vice president of operations for the location.

He added that Pat’s Travel Center wants to be sure to get the wow factor from its outward appearance but also have the amenities and food offerings to provide an amazing overall customer experience.

Momin joined the company in 2009, but his parents and uncle bought the location in 1980. At that time, it was called Port Auto Truck Stop, and the name stuck for years.

“In 1996, the business was doing well and was expanding due to the ports in Houston, and they realized they were missing the amenities drivers were looking for,” Momin said. “My parents would let drivers borrow their car to pick up food in town. Other employees would drop professional drivers off at hotels and pick them up in the morning to bring them back.”

At that point, his family thought it was a good time to remodel to include the amenities professional drivers needed, and added a restaurant, hotel and maintenance shop. It continued using the name Port Auto Truck Stop.

In 2015, it was time to expand again. “A lot of vendors didn’t pronounce the name correctly,” Momin said, adding that Pat’s became an abbreviation for Port Auto Truck Stop.

Most recently, the location embarked on a three-year remodel. “We didn’t want to shut down our business. We ended up doing the renovations over a three-year period and compartmentalized it,” Momin said.

The renovations started with the restrooms and restaurant. “Then it moved over to the c-store,” Momin said, adding that the c-store renovations wrapped up in August 2020.

Momin said he is most proud of the location’s food offerings. “Before it was quite generic. It wasn’t anything to be excited about,” he said.

Pat’s Travel Center focused on quality as well as speed and went with a hot-plate option. “You get a nice hot meal and can pick and choose what you want. We can make the meal for you, box it up, and hand it to you. You’re getting the restaurant experience but with the speed,” Momin said.

While Momin was proud of the food, Darren Schulte, vice president of membership for NATSO, said the location should also be proud of its staff.

“Sean’s greatest accomplishment as a leader is his people,” Schulte said, adding that the location’s reviews often compliment the employees. “His people are genuinely kind.”

Momin said he has learned that by properly training team members, communicating what they need to do and what is expected of them, they are more receptive. “We don’t leave anyone out in the dark,” he said, adding that he always tries to communicate any changes going on at the site. “My mentality at work is I work for them. I work for my team.”

Those at Pat’s also work to bring joy into team members’ days by celebrating staff’s accomplishments and birthdays. “We just had a staff member get her GED, and we celebrated that with cake and let her know she is appreciated,” Momin said.