NATSO members continue to urge lawmakers to ensure that sustainable aviation fuel does not receive a special carve out in the Build Back Better legislation and instead is at parity with the biodiesel tax credit.
More 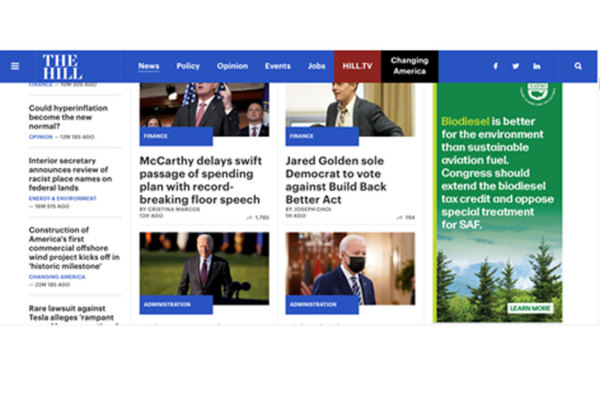 NATSO members continue to urge lawmakers to ensure that sustainable aviation fuel does not receive a special carve out in the budget reconciliation package known as Build Back Better and remains at parity with the $1 per gallon biodiesel tax credit. A tax credit for SAF, without parity for other transportation fuels, will hurt the ability to further reduce the carbon footprint of the transportation sector. SAF requires more feedstock, higher energy inputs, and produces less emissions savings than biodiesel and renewable diesel.

In recent days, NATSO members Fred Jubitz, President and CEO of Jubitz Corp., Anthony Richard, CEO of Sapp Bros., and Gerry Danniel, Chief Operating Officer of Onvo, signed letters to the editor that appeared in The Oregonian, the Boulder Daily Camera and Pennsylvania's Patriot News urging lawmakers to push back against the BBB’s flawed proposal.

Additional letters have appeared in the Pittsburgh Post Gazette, the Portland Tribune and the Greeley Tribune in Colorado.

NATSO continues to urge lawmakers to extend the biodiesel tax credit and oppose special treatment for SAF and recently launched an advertising campaign targeting such Washington, D.C., based publications as The Hill and Politico Pro Morning Tax.

If unproven sustainable aviation fuel technologies receive a special carve-out, it will undercut, and eventually eliminate, access to biofuels that already work and are better for the environment. The biodiesel tax credit incentivizes fuel retailers to buy and blend biofuels and has worked successfully to build a robust renewable diesel industry in the United States while decreasing carbon emissions associated with transportation fuel. The U.S. biodiesel and renewable diesel market has grown to approximately 3 billion gallons in 2020 from roughly 100 million gallons in 2005.

NATSO along with SIGMA and representatives of the trucking and convenience store industries urged lawmakers to extend the $1 per gallon biodiesel tax credit in the upcoming budget reconciliation package and ensure tax parity for any new credits awarded for transportation fuels that compete for the same feedstocks. The organizations specifically warned that more favorable tax treatment to other transportation fuels, such as sustainable aviation fuel (SAF), would increase diesel prices as well as carbon emissions, since SAF production is a less efficient process than renewable diesel and biodiesel production.