More than 60 NATSO members spent May 14– 16 in Washington, D.C. as part of the industry's annual advocacy event.
More 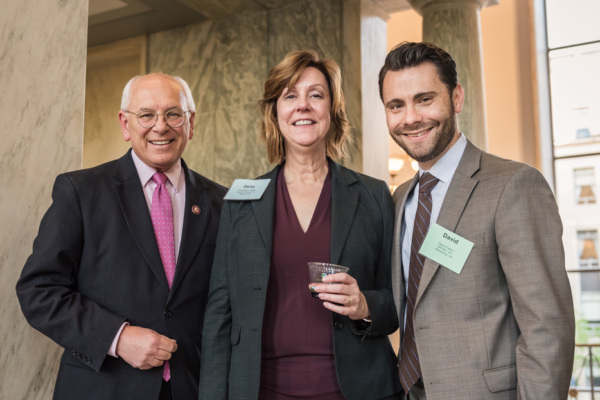 More than 60 NATSO members spent May 14– 16 in Washington, D.C. as part of the industry's annual advocacy event.

With Congress laying the ground-work for infrastructure legislation, NATSO's meetings on Capitol Hill focused almost exclusively on the need for Congress to maintain the longstanding prohibitions on commercial rest areas and tolling existing Interstate highways.

“Truckstops and travel centers are the bedrock of many communities across the United States,” said NATSO Chairman Bob Wollenman, managing partner of Deluxe Truck Stop in St. Joseph, Missouri. “It’s important that our elected officials understand the vital role that our industry plays as an employer and a taxpayer in communities throughout the country.”

During the two-day event, NATSO members heard from a series of speakers, beginning with Eva Rigamonti, an associate with Steptoe & Johnson, who discussed the various obligations and benefits associated with travel centers being permitted to redeem SNAP benefits in their convenience stores.

A noon lunch featured guest speaker Jim Ellis, a political analyst who discussed the 2020 election and what to expect and look for as the race takes shape in the coming months.

Representatives from the biofuels and electric charging industries, including Allison Cunningham of the Natural Gas Vehicles for America, John Fuhrer of Growth Energy, Michael McAdams of the Advanced Biofuels Association and David Schatz of Charge Point discussed how each of those industries sees its future and what legislative and regulatory hurdles lie ahead within the fuel space.

During their meetings with la makers, NATSO members urged Congress to seek long-term, sustainable solutions to infrastructure funding and reject funding proposals that would harm off-highway businesses, communities and the traveling public.

Specifically, NATSO supports increasing the motor fuels taxes, which haven’t been increased in more than 25 years, as a means of increasing critical infrastructure revenues.

Advocates also asked their elected officials to extend the biodiesel tax credit, which expired at the end of 2016.

“If Congress fails to act in the coming months, yet another year—possibly longer—will pass without our nation’s lawmakers addressing our real and present infrastructure funding problems,” said Ernie Brame, chairman of NATSO’s Government Affairs Committee and general manager of Kenly 95 Truckstop in Kenly, North Carolina. “Advancing infrastructure policy in 2019 is imperative.”

NATSO’s Day on Capitol Hill concluded on the evening of May 15 with its annual pie reception for Members of Congress and their staff. Elected officials and their staff enjoyed nearly 200 made-from-scratch pies, donated by TravelCenters of America and DAS Companies. Sponsors also included Federated Insurance, Midwest Electronic Gaming and S&D Coffee.